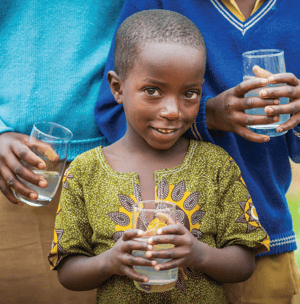 World Vision has helped impact millions of lives through transformational gifts from philanthropists—evidence of God’s faithfulness. Today, more families have access to clean water along with new hope for healthy futures. Parents are better equipped to earn incomes that meet their children’s basic needs. Children are protected and nurtured, while they are growing in their Christian faith. A new day is dawning for a generation of people.

In the last 20 years, the number of children dying from preventable causes — from hunger, poverty, and disease — has halved, going from more than 30,000 a day to under 15,000. The number of people living in extreme poverty, those living on less than $1.90 a day, has dropped by more than 1 billion.

For the first time in modern history, the world is coming to the collective realization that it is possible to end extreme poverty in our lifetimes. And you can be part of it.

Supporting the 2030 Sustainable Development Goals, World Vision is dedicated to keeping this momentum going to help end extreme poverty in all its forms, everywhere, by 2030. Driven by a $40 million gift to its water programs by Dana and Dave Dornsife — which Forbes magazine and The Bridgespan Group ranked as one of the top five most promising philanthropic big bets for social change — World Vision announced in September 2015 a commitment to reach everyone, everywhere they work with clean water by 2030.

“I really get excited at phrases like ‘end poverty by 2030’ and ‘clean water everywhere we work,’” said Laura Abernathy, a World Vision donor partner. “Those big goals may sound like publicity, but when you learn about World Vision and the strategies they have in place, you have faith. I'd hate that to be the headline in the news and not have been part of it.”

Audacious ventures are challenging, but history shows we can succeed.

Together, we have impacted the lives of more than 200 million vulnerable children by tackling the root causes of poverty. From 2010 to 2015, World Vision’s first capital campaign raised nearly $538 million and reached nearly 26 million people. That’s more than 500 people every hour for five years.

Now, World Vision is the leading nongovernmental provider of clean water in the developing world. Every 60 seconds, a family gets access to clean water, a hungry child is fed, and a family receives the tools to overcome poverty.

This incredible success took significant transformational gifts from philanthropists, corporations, and foundations; hundreds of millions of dollars in government grants; more than 60 years of experience in sustainable global development; and scale — more than 42,000 staff working with communities worldwide in nearly 100 countries.

A 2017 Bridgespan study of 15 of the greatest social impact stories of the 20th century reveals the majority of initiatives took at least 20 years to achieve success and involved at least one philanthropic investment of $10 million or more.

“World Vision has the proven methods we know will help end extreme poverty in our lifetime, the community development model that allows these systemic social changes to last after we leave, and the scale to reach millions upon millions of people with this God-honoring work,” said Chris Glynn, senior vice president of Transformational Engagement at World Vision. “Large philanthropic gifts are the catalyst that drives us to achieve maximum impact.”

Below are stories about five of our major donor partners. See what has drawn them to World Vision and why they felt led to make significant investments in this work.