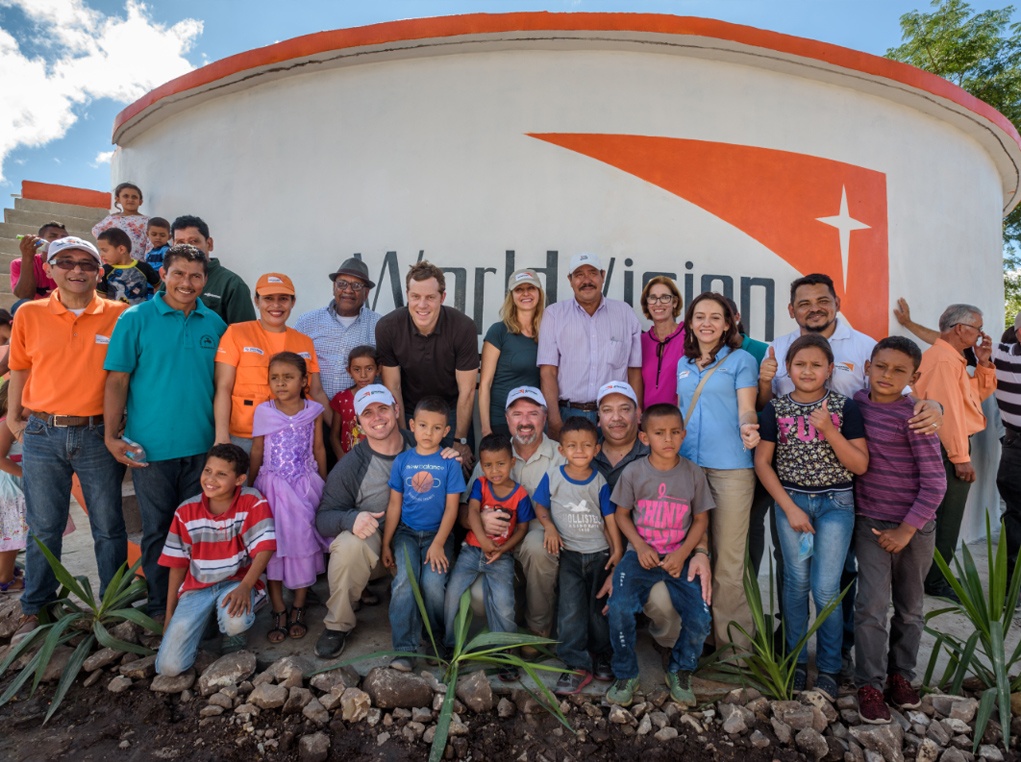 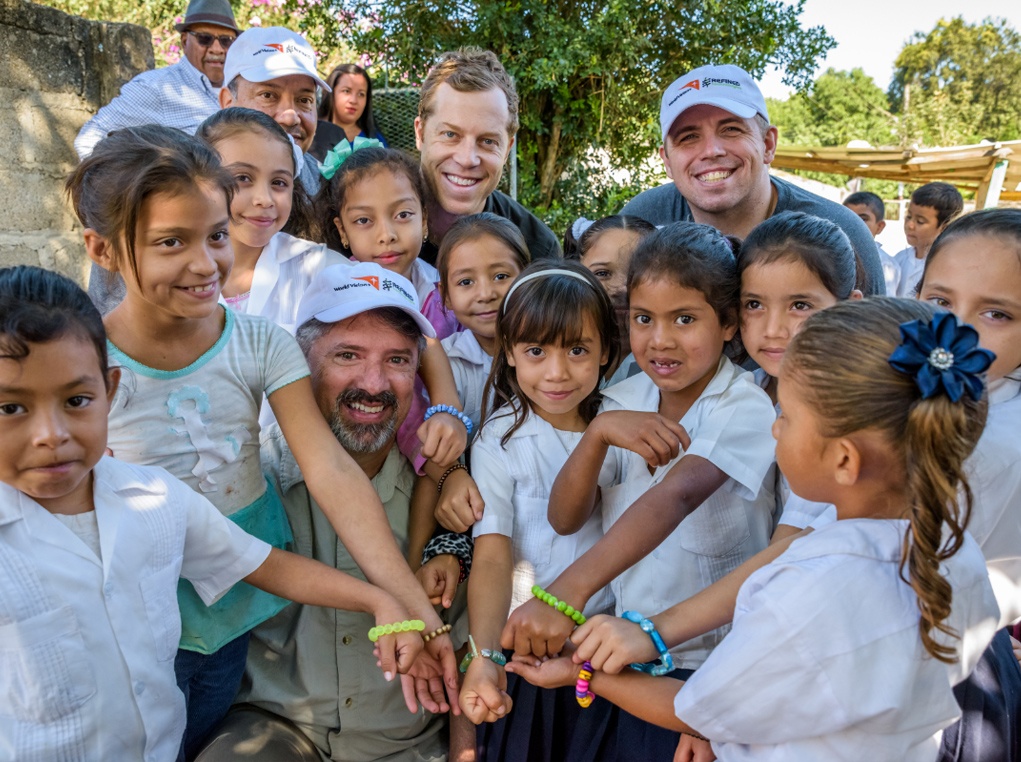 Cody Nath, 37, can’t remember a time growing up when his family didn’t have World Vision sponsored children — often two or three at a time. Then at age 14, he traveled with his father, Bill Nath, to Mexico to see World Vision’s work at the time with street children. Nicaragua came next, then Honduras, and with each trip, the values his parents instilled in him — the importance of missions, prayer, and faithful giving — became ingrained.

In 2001, Bill founded Refined Technologies, Inc. (RTI), a chemical decontamination company providing operational consultancy, chemical cleaning, and mechanical rental services to refineries. Cody succeeded his father as president and CEO in 2016. From the beginning, their mission statement leads with, “Honor God always.” Cody explained this means everything from operating under biblical principles like honesty, integrity, and respect to reinvesting profits for eternal impact into ministry partners like World Vision.

“We believe our company belongs to God, and we are simply stewards,” Cody said. “We’re responsible to him for how we use the profits from the business. And as Christians, we know we’re called to give.

Beyond the calling, Cody finds the opportunity to give extremely rewarding. “It blesses us,” he said. “We end up benefiting because we're now giving as a team instead of giving as a family — that’s a very rewarding experience. The Nath family is only a piece of this; we earned these profits as a Refined Technologies team.

“I also want to encourage our team to give and know that they’re part of something much bigger than refinery services. And I know that’s happening because of the stories I hear from our team. When people come to work for us because of what we’re about, then I know it’s making a difference.”

Cody’s vision is to engage RTI employees by providing numerous ways for them to participate in the partnership with World Vision and emphasizing how excellent work enables the partnership — employees delivering their daily work translates to dollars for water. Opportunities for employees to get involved include paying a portion of sponsorship for Honduran children, taking brief RTI-sponsored trips to Honduras to see World Vision’s work toward ending the water crisis, distributing co-branded water bottles to clients and partners to share their commitment to help make a difference, and walking in World Vision’s annual Global 6K for Water.

“When people know that what you do matters, it’s not just a job. That changes lives,” Cody said. “Our employees would say they’re different people from having worked and spent time here. And their families are different. World Vision is part of that. It’s an aspect of what we do to try and be our whole selves at work.”

During a trip to Honduras about five years ago, solving the global water crisis became a personal mission for Cody. Confronted with the reality of a community’s water source in western Honduras near Gracias, Cody saw dirty water like he’d never seen before — dirt-ridden suds had left a thick film on the surface. “It was terrible — like all the horrible photos you’ve seen,” Cody said. “If it’s within your power, you’re not going to walk away without doing something to help.”

Our partnership with World Vision is incrementally strategic — growing in strategy, trust, and direct involvement. We’re trying to figure out how can we leverage more and more of what we’re doing as a business to make an impact globally with World Vision. 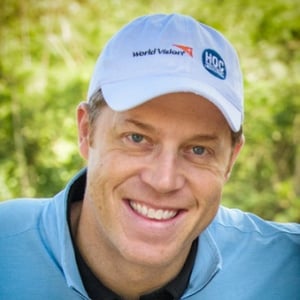 We believe our company belongs to God, and we are simply stewards. We’re responsible to him for how we use the profits from the business. And as Christians, we know we’re called to give.

So Cody integrated his personal mission with his work at RTI. Over the past five years, Cody broadened his investment to water, sanitation, and hygiene projects, culminating in a $1.1 million gift to World Vision made in 2017.

Generous philanthropic gifts like that from Cody and RTI have enabled World Vision to reach 10.4 million people with clean water in the last two and a half years and remain on track to reach everyone, everywhere they work with clean water by 2030 — an estimated 50 million people. And as the leading nongovernmental provider of clean water in the developing world, World Vision is a proven leader in solving the global water crisis reaching one new person every 10 seconds.

“What I really like about World Vision, and why we’ve gotten more involved, is the holistic approach,” Cody said. “This is a development model that helps people develop physically, emotionally, and spiritually. World Vision launches an effort and lets the community drive it forward as their own.”

World Vision believes in a big-picture approach to helping communities address critical needs — bringing together all of the pieces — nutritious food, clean water, economic opportunities, healthcare, education, protection, and the love of Jesus — for a full solution to the puzzle of poverty.

“World Vision is a place where you can make a significant financial investment,” Cody said. “No investment is too big. They have the structure and organization to effectively use your gifts as they grow over time.

“World Vision has the organizational capacity to execute investments to scale and always with a spiritual, Christ-centered focus. If you don't have a spiritual component, it's helpful, but not life-changing.”

Cody’s life-changing investment truly hit home in January while traveling to the Jamastran Valley of Honduras to celebrate bringing clean water to 3,000 people in two communities — Sartenejas and Zamorano.

“Being part of a visibly transformative project that can happen in under a year to dramatically change the lives of people — it’s not a difficult concept to say we should do more of that. So then we ask ourselves, ‘How can we increase our giving as a company and as individuals?’”

He also recognizes that the project was not without its learnings and challenges.

“World Vision does a good job of managing, ‘This is what we said we were going to do. This is what the challenges were, and this is what we accomplished.’ It’s not like everything goes smoothly. We’re dealing with developing countries and clean water projects that have never existed before. So there’s learnings; there’s challenges.”

But beyond challenges, he has confidence in the sustainability of World Vision’s water projects. “When we spend an investment on a project like Jamastran, I feel very confident the project will still be helping people in 20 years,” Cody said. “They now have clean water for life, not clean water for a year. Our confidence in the local World Vision team is very high due to their capabilities, character, and commitment.”

Now he’s looking forward to additional development work for the families and children he has come to know.

“We know that when we invest in water with World Vision, that’s going to lead to additional community development,” Cody said. “We didn’t leave Jamastran in January thinking, ‘Great, we’re done.’ We know the local communities are committed to continued development and the many challenges that lie ahead. We also realize there are many more communities in need of getting started on their development journey, and we’re eager to be involved. We look forward to an enduring partnership with World Vision and seeing families changed in Jesus’ name.”

Cody Nath's story is the third of five stories about some of our major donor partners. You can explore the other stories below. Read about how their contributions are helping to end extreme poverty.