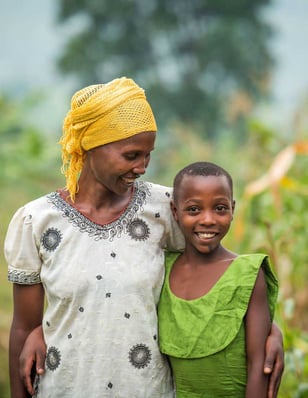 The Kinyarwanda word Dativa means one who wears a traditional crown. The name fits 49-year-old Dativa, who bears herself like royalty. But that regal countenance hides the many sorrows life has tossed her way.

As a girl, Dativa desired to serve others, dreaming of becoming a doctor or a community leader. But Dativa was a ruler in name only as family and societal issues thwarted her advancement.

Leaving school without learning to read

Even as a girl, Dativa knew that to achieve her dreams, she needed an education. But her mother suffered from mental illness, and it fell to Dativa to care for her entire family: eight siblings and her mother.

With such responsibility at home, Dativa couldn’t concentrate when she could attend school. By third grade, she still couldn’t read. Disheartened, she left school — never to return.

“I felt very sad because I would see others getting opportunities because of their studies,” Dativa says.

She spent 20 years caring for her mother until the Rwandan genocide in 1994 took her mother’s life along with more than a million others.

Two years later, Dativa married, but there would be no fairy tale ending for the woman named for a queen. After a lengthy illness, her husband died, leaving her to raise their children alone. She farmed and did odd jobs so they would have the education she’d been denied.

“I always pray to God so that what I couldn’t achieve, they would go beyond that,” she says.

Dativa scraped together enough money to send one of her children to complete secondary school and another currently attends ninth grade. And Dativa is not finished. She wants her oldest child to go to university, and she’s trying to save money for that expense.

All this from a woman who didn’t finish third grade and can’t read.

Dativa lacks self-esteem because of her inability to read. She doesn’t want that to happen to children in her community.

Handling the stigma of illiteracy

Dativa hasn’t pursued job opportunities in her community that she thinks might require her to read. “I stigmatize myself,” she says. “Nervousness must come because when you are with people who are educated, somehow you fear them.” Despite her achievements, the stigma of illiteracy left her with wounds that haven’t healed. It’s not anything the people who can read do that makes her feel bad. It’s her own self-doubt.

Despite her feelings of inadequacy, Dativa’s passion for education drives her. She’s become an outspoken advocate for children in her community and is not above giving a royal tongue-lashing to parents who let their children skip school. She knows the downside of lacking an education.

“It means the child is not getting knowledge for a better future,” she says. “The community is not benefiting.”

Offering a future of dreams

That childhood desire to serve has never gone away. Dativa met a 4-year-old girl named Keza whose mother wasn’t able to care for her. And as Pharaoh’s daughter raised Moses as her own, Dativa took over Keza’s care to offer her a more promising future.

Like Dativa, Keza struggled in school at first, ranking 27th in a class of 30 children and repeating first grade.

But as Keza re-entered first grade, World Vision started reading camps in her community. Dativa made sure that Keza attended.

Reading camps are a key component of World Vision’s Unlock Literacy program. The camps offer children more attention from educators than they get in their classrooms. The program also trains teachers on more effective teaching methods. And best of all, children are allowed to take books home with them as part of the education program.

“I remember that time. She came back singing, feeling confident,” Dativa says about Keza’s first visit to a reading camp. “She said that she would never be late for the reading camp.”

Now 11 and in the third grade, Keza ranks second in her class. She doesn’t have to worry about dropping out of school as the woman raising her once did. Thanks to the doors that Dativa’s drive opened, Keza is free to pursue her dreams of being a doctor.

Dativa wishes such programs had existed when she struggled in school. “I would have completed knowing letters, consonants, knowing how to read, writing my name; it would have helped before and after dropping out,” she says.

Dativa sits listening to Keza read from one of those books from the reading camp, her hair wrapped in a yellow scarf. It almost seems as if she’s wearing a crown. And why not? After decades of hardship, Dativa’s life is now fit for a queen.