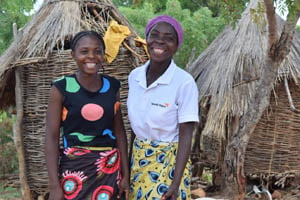 “It’s a miracle that my daughter is alive today,” says Sonya Hamboya, a 25-year-old widow in southern Zambia.

Sonya is a vibrant mother of two adorable kids, a boy and girl, 11 and 5, respectively. She lives with her children and baby niece in a mountainous, remote village in World Vision’s Moyo Area Program.

As a child, Sonya loved school and hoped to become a doctor. Unfortunately, at 14, she became pregnant in eighth grade and was forced out of school.

Although Sonya could go back to school after delivery, economic constraints put an end to her education dreams. “My parents could no longer afford to pay for my school fees. I had no choice but to stop school for good,” she says.

At 16, Sonya was forced into marriage due to poverty that hit her family. “Life was hard for me. I didn’t know how to be a wife and mother at the same time,” she says. When her son was six, Sonya conceived her second child. As with her first pregnancy, she did not have antenatal care. Sonya only went to the hospital once during her entire pregnancy. It was during this visit that she was struck with news that would forever change her life. I was told that I was HIV positive. I was so scared; in fact, I had never been that scared about anything in my life. I had heard about HIV, but I never thought it could happen to me,” she explains.

After her diagnosis, Sonya was put on anti-retroviral treatment; however, she never took the medicine because she didn’t think that it would help. She gave birth from home again, this time with the help of her in-laws. At three months, Sonya’s baby girl became very sick. “At the hospital, I was told that she was also HIV positive. My baby’s health never got better; she died when she was a year old,” Sonya explains with teary eyes.

With time, Sonya became pregnant again. Her husband, who was also HIV positive and in denial, died. “I was so scared and didn’t want the same end for my child,” she reveals.

As luck would have it, Sonya’s mother, Loveness, a high-spirited woman, had become a community health worker and member of a Safe Motherhood Action Group (SMAG). She was trained by World Vision to provide Timely Targeted Counselling (TTC) to expectant and lactating mothers. “I regularly visited Sonya to educate her about the importance of antenatal care, delivering from a health facility and Prevention of Mother to Child Transmission (PMTCT) of HIV,” Loveness explains.

As a result of the counselling, Sonya attended her first antenatal class three months into her pregnancy. She went back on anti-retroviral treatment, made sure she followed all the PMTCT steps and delivered a beautiful HIV-free baby.

“Thank you, World Vision, for training SMAGS. They are indeed life savers! As a re-sult of TTC, my child is healthy and I will live long to see her grow,” she says, as she smiles at her baby.