A Passion For Farming 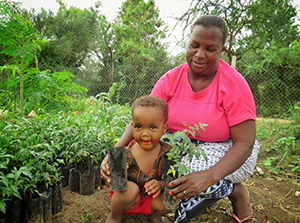 “When I saw these children living in desperate conditions, my heart broke and I asked their mothers if I can take them with me and raise them.” Magdalena pauses for a moment and takes a deep sigh with her head bowed down and when she raises her head up, it is clear that she is having a difficult time pushing back tears from her bright eyes. She looks at me and breaks the silence “Being a mother is a blessing, but being an abandoned single mother is the worst nightmare anyone can wish for,” she says.

Magdalena opens up about her past when life was hard. Married and with a son of her own, her husband left her for another woman. When her husband and the woman could not support the children they had together, Magdalena took them in.

Earning an income through laboring in other people’s farms, she would spend the day digging or sorting peanuts, only to be paid a dollar. It was not enough to buy food for the children. “I got eczema all over my body and my hands used to ache at the end of the day, but there was nothing else I could do. My husband had left me for another woman, he lost focus on our family and I had to be strong and raise the family on my own,” she says. Her children would spend the day without food waiting for her to come home with whatever she had earned. “Despite all the hardships I made sure the children had necessary school supplies,” she says, adding, “Take it from me, there is a miracle in a woman who commits her children into the hands of God.”

Magdalena met World Vision through Damas, a friend who was already involved with World Vision activities and had started a vegetable and tree nursery. Both Magdalena and Damas sing in the church choir and Damas would speak about how their community can partner with World Vision to end poverty and hunger. Many were persuaded and joined together to start a tree producer group. World Vision trained them in agriculture, savings and lending. “The staff were very helpful and would regularly visit our farm.” World Vision also supported them with a water tank and a fence to protect their tree nursery. Exposure visits to other farms that were doing well in other ADPs is one of the things that fueled Magdalena’s passion for farming.

“I am very happy now and I feel great to have this farm. It’s like my office where I work and I’m no longer moving from one farm to another looking to sell my labor, as I used to,” says Magdalena.

All her children attend school and one is currently in college. Magdalena can provide her children with three nutritious meals each day from the sale of trees and vegetables from a garden that she is running. She has also installed a water tap at her home and her children do not have to walk a long distance to fetch water. The Okoa producer group graduated to a savings group which was an opportunity for Magdalena to save and finally open a bank account where she is saving her income.

“I know there is a chain of people supporting this community through World Vision, some we see and some we don’t, but I pray for all of them,” says Magdalena with a smile that makes her bright eyes shine.